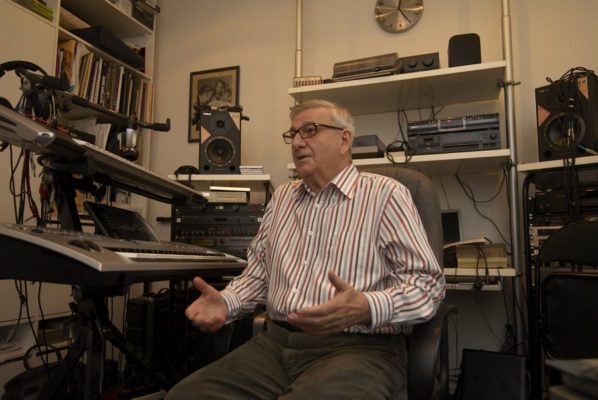 George Garanian was one of the first musician, who attracted attention of Western World to Jazz from USSR. As a musician (saxophone-alto) conductor and composer he always was one of the best. He organised MELODIA – the wonderful band of the 70-80 years, MOSCOW BIG BAND – also the best in 1992-1995, GEORGE GARANIAN BIG BAND (Krasnodar, works now, band leader – Ilya Filipov), MELODIA – GEORGE GARANIAN BIG BAND (Moscow, works now, band leader – Antti Martin Rissanen,Finland). G.Garanian performed at many international jazz festivals (Finland, India, Indonesia, Cuba, was on tours in Germany, USA, Japan, USA, Australia, Sweden, France, Taivan, China, etc… For 9 years, in the prime of the creative forces, was not allowed to travel abroad, because jazz musicians were not considered politically reliable. He wrote music to many most popular Soviet films (40 films), was the conductor of the State Cinema Symphony Orchestra (conducted 200 films), recorded more music, than any other jazz musicians in Russia. Frederic Starr in his book about Russian jazz wrote that Garanian is one of the best jazz musicians in Russia. Starr quoted famous American critic John Hammond who heard George at the Prague jazz festival (Chechoslovakia) – “George Garanian is phenomenal”. And person number one in jazz – the host of “Voice of America” jazz program Willis Conover invited him many times to participate at international festivals in Hungary,Jugoslavia and other countries and broadcasted his recordings. George Garanian was one of the most “sought after” musicians in Russia. He was the only one jazz performer who granted the privilege to perform 3-4 concerts annually in the famous concert hall – Great Hall of Moscow Conservatory (regularly the first place for the first names in serious music in the world). He was the conductor of the famous Tchaikovsky Symphony Orchestra during recording session for two CD album “Oregon in Moscow” with renown American jazz group Oregon. This album was nominated in 2000 for the most prestigious in the world Grammy award. During the last years George made a lot of highly successful concerts in Russia and abroad.